»Four LSTs will be arranged at the centre of both the northern and southern hemisphere arrays to cover the unique low energy sensitivity of CTA between 20 and 150 GeV.«

The Large-Sized Telescope (LST) project team consists of more than 100 scientists from ten countries: Brazil, Croatia, France, Germany, India, Italy, Japan, Poland, Spain and Sweden. Because gamma rays with low energies produce a small amount of Cherenkov light, telescopes with large mirrors are required to capture the images. Four LSTs will be arranged at the centre of both the northern and the southern hemisphere arrays to cover the unique low energy sensitivity of CTA between 20 and 150 GeV. The LSTs will also have a very good sensitivity up to energies of several TeV, which is, however, covered by Medium-Sized Telescopes (MSTs) more efficiently.

The LST is an alt-azimuth telescope. It has a 23 m diameter parabolic reflective surface, which is supported by a tubular structure made of reinforced carbon fibre and steel tubes. A reflective surface of 400 m2 collects and focuses the Cherenkov light into the camera, where photomultiplier tubes convert the light in electrical signals that can be processed by dedicated electronics. Although the LST will stand 45 m tall and weigh around 100 tonnes, it will be extremely nimble, with the goal to be able to re-position within 20 seconds. 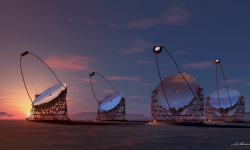 An illustrative schematic of the telescope with the main assemblies:

Both the re-positioning speed and the low energy threshold provided by the LSTs are critical for CTA studies of galactic transient, high red-shift active galactic nuclei and gamma ray bursts. The LSTs will expand the science reach to cosmological distances and fainter sources with soft energy spectra.

»The LST camera has a total field of view of about 4.3 degrees and has been designed for maximum compactness and low weight, cost and power consumption while providing optimal performance at low energies.«

The LST Camera shares many elements with the NectarCAM for the MSTs. It has a weight of less than two tonnes, a total number of channels of 1,855 divided into 265 photomultiplier tube (PMT) modules that are easy to access and maintain. PMTs with a peak quantum efficiency of 42 percent are used as photosensors to convert the light into electrical signals. To maximize the light throughput, each photosensor is equipped with an optical light concentrator, optimized for the field of view and geometry of the photosensor.

The camera has a total field of view of about 4.3 degrees and has been designed for maximum compactness and low weight, cost and power consumption while providing optimal performance at low energies. Each pixel incorporates a photosensor and the corresponding readout electronics. These electronics are based on the Domino Ring Sampler Version 4 (DRS4) chip, which is developed at the Paul Scherrer Institute in Switzerland and currently used by several experiments; among them the MAGIC Cherenkov telescopes.

The camera trigger strategy is based on the shower topology and the temporal evolution of the Cherenkov signal produced in the camera. The analogue signals from the photosensors are conditioned and processed by dedicated algorithms that look for extremely short but compact light flashes. Furthermore, the LST cameras are interconnected in order to form an on-line coincidence trigger among the telescopes, which helps suppress accidental triggers by up to a factor of 100.

The construction of the LST prototype, LST-1, was completed in October 2018 in La Palma, Canary Islands, Spain, on the site of the Observatorio del Roque de los Muchachos. The prototype is foreseen to become the first LST telescope of CTA, and, in fact, the first telescope on a CTA site, to be operated by the CTA Observatory (CTAO). As any other technical delivery in the large, multinational CTA project, the LST-1 will need to undergo a critical design review to verify that the design complies with CTA science goals, operational needs, safety standards, etc. before it is formally accepted by CTAO.

Go to the LST-1 Inauguration webpage (https://www.cta-observatory.org/lst-1_inauguration) on the CTA website for more information in other languages and links to supporting materials, images and video.