AMANAR: Under the Same Sky

On 8 July 2019, “AMANAR: Under the same sky”, an initiative to promote and support the scientific education of children living in the Saharawi refugee camps in Tindouf (Algeria), was launched in Gran Canaria (Canary Islands, Spain). The project, conceived by the international organization GalileoMobile and the Asociación Canaria de Amistad con el Pueblo Saharaui (ACAPS), consists of a combination of outreach activities and visits to the Canary observatories with the children in July and August as part of  their summer in the Canary Islands with the “Holidays in Peace” program. The project will also include a visit to the refugee camps by a group of scientists and experts in October. The Cherenkov Telescope Array Observatory (CTAO) is one of the participating partners in this project, supporting the organization of activities and the provision of educational material for the camp visits. 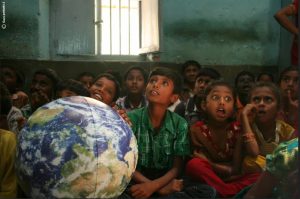 The summer activities in the Canary Islands within the “Holidays in Peace” program will be carried out in Tenerife (July 20), La Palma (27 July) and Gran Canaria (August 3). In Tenerife and La Palma, the Saharawi children will join us in a visit to the observatories, where they will get an up-close look at some of the telescopes, such as the Large-Sized Telescope prototype (LST-1) located at the El Roque de los Muchachos Observatory (La Palma). Moreover, the group has crafted educational and outreach workshops for the children to inspire their interest in the Cosmos and develop their creativity. These activities include designing a new telescope to catch gamma rays and learning about the Solar System, among others. CTAO Outreach and Education Coordinator, Alba Fernández-Barral, and the Outreach and Communication Officer, Megan Grunewald, have actively participated in the organization of activities for these two sites and will join the group on these dates. The last activity will take place in Gran Canaria, in the Juan de Zamora school (Arucas), where the Saharawi and local children will learn about astronomy and will enjoy the night sky together. The astronomical program within the “Holidays in Peace” is expected to continue for the next three years. The project will close this year in October with a visit to the refugee camps in Tindouf, where scientists and experts from different organizations will carry out workshops at schools and will study and disseminate the astronomical knowledge of the Saharawi population.

“The project has a long-term goal of contributing to raise awareness, at the national and international level, about the hard conditions that the Saharawi people must live in the refugee camps, which has lasted already for 40 years. To do so, we will create different audiovisual materials, such as an immersive video and a documentary, with which we will give a voice to the participants and disseminate their message of peace and social justice,” explains the main organizer Sandra Benítez Herrera, astrophysicist and science communicator at the IAC’s Communication and Scientific Culture Unite (UC3) and member of GalileoMobile since 2011. “The institutions collaborating in the project have committed to help in this sense, too.”

The CTAO’s participation is within the framework of its own Astrodiversity program. The CTAO is a global organisation proud of its diversity that aims to become a reference of equity and respect in science, as well as to work internationally to achieve equality in our field. Based on this idea, the CTAO Outreach, Education and Communication group has created the Astrodiversity program, under which it joins all its diversity-related activities.

GalileoMobile is an international project, itinerant and non-profit, whose objective is to share Astronomy with students and teachers of rural communities with reduced access to programs of this type. The team consists of a group of 15 volunteer astronomers, educators and science communicators from around the world. Since its creation in 2008, GalileoMobile has reached more than 1,400 teachers and 16,000 students, donating hundreds of telescopes and organizing public sky observations for thousands of people in 15 countries: Argentina, Bolivia, Brazil, Chile, Colombia, Cyprus, Dominican Republic, Ecuador, Guatemala, India, Nepal, Peru, Spain, Uganda and the United States of America.