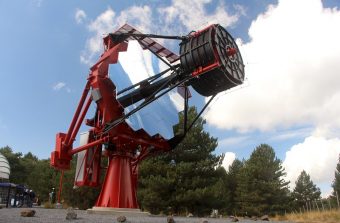 The ASTRI-Horn prototype telescope is located at the observing station of the INAF Astrophysical Observatory of Catania, in Serra La Nave, on Etna, where it was installed in 2014. The primary tassellated mirror has a diameter of 4 meters and the secondary monolithic mirror is 1.8 meters in diameter.

Exactly 30 years after the first historical observation of Crab nebula at TeV energies, which opened the era of TeV astronomy with the Imaging Atmospheric Cherenkov Technique (IACT), another advancement in IACT technology has been achieved. The ASTRI-Horn Cherenkov Telescope, based on the innovative Schwarzschild-Couder dual-mirror configuration and equipped with an innovative camera, has detected the Crab Nebula at TeV energies for the first time, proving the viability of this technology.

In 1989, the very first detection of the Crab Nebula at TeV energies (about a trillion times the energy of visible light) was obtained with the Whipple Telescope. This discovery was the initiation of TeV astronomy, which, with its rapid growth, has led to the detection of about 200 gamma-ray sources from other ground-based detectors like H.E.S.S., MAGIC and VERITAS and has paved the way for the next generation: the Cherenkov Telescope Array Observatory (CTAO). Because gamma-rays never make it to the Earth’s surface, these instruments use the Imaging Atmospheric Cherenkov Technique (IACT) to detect the by-product of the gamma-ray’s interaction with the atmosphere: Cherenkov light. The interaction produces cascades of subatomic particles – these highly energetic particles can travel faster than the speed of light, which causes a faint and extremely short (of the order of a billionth of a second!) flash of bluish light. Cherenkov telescopes, since the very beginning, have been built following a typical optical design where the light is reflected off the telescope’s mirror to be captured by the camera and then is converted into an electrical signal that is digitized and transmitted to record the image of the light.

The Italian National Institute for Astrophysics (INAF) is leading the ASTRI (Astrofisica con Specchi a Tecnologia Replicante Italiana) project aimed at the design, deployment and implementation of a novel end-to-end prototype telescope that is proposed for the CTA Small-Sized Telescopes (SSTs). This Cherenkov telescope, named ASTRI-Horn (in honor of Guido Horn d’Arturo an Italian astronomer who first proposed in the past century the technology of tessellated mirrors for astronomy), is adopting a wide (10°x10°) field Schwarzschild-Couder dual-mirror optical configuration and is equipped with a specifically designed, innovative Silicon photo-multiplier (SiPM) camera managed by very fast read-out electronics. The ASTRI-Horn prototype, located on Mount Etna (Italy) at the INAF “M.C. Fracastoro” observing station, has been conceived as an end-to-end project including the full data archiving and processing chain, from raw data up to final scientific products.

The observations of the Crab Nebula were carried out between December 2018 and January 2019, during the ASTRI-Horn telescope verification phase, for a total observation time of about 29 hours, divided in on- and off-axis source exposure. The camera system was still undergoing assessment, and its functionality was not fully exploited. Moreover, owing to recent eruptions of the Etna Volcano, the mirror reflection efficiency was partially reduced. In spite of such camera and mirrors limitations, observations yielded the detection of the Crab Nebula with a statistical significance of 5.4s above an energy threshold of about 3.5 TeV, definitively probing the new technologies and opening a new era for IACT.

“The result obtained by ASTRI is an important milestone for the IACT technologies. It is demonstrating that the dual mirror configuration, firstly proposed by the great German Astrophysicist Karl Schwarzschild more than a century ago, is performing well. It is now possible to achieve a very large field-of-view with a much more compact Cherenkov telescope design, easily observing very energetic cosmic gamma-rays up to a few hundreds of TeV” says Giovanni Pareschi, astronomer at the INAF-Milano and principal investigator of the ASTRI project.

“CTA has been exploring the dual-mirror technology since the very beginning of the project, and some prototypes have been realized using such an approach: the ASTRI-Horn and the GCT for the SST and the SCT for the Medium-Sized Telescope,” says Federico Ferrini, Managing Director of the CTA Observatory (CTAO). “The result obtained by ASTRI-Horn telescope is very encouraging and confirms the potential of technological advancement for Cherenkov astronomy.”

The ASTRI project (http://www.brera.inaf.it/astri/) is led by the Italian National Institute of Astrophysics (INAF) with the support of MIUR (the Ministry of Education, Universities and Research) and with in collaboration with a number of Italian Universities (including, Perugia, Padova and Roma Tor Vergata) and the Italian National Institute of Nuclear Physics (INFN), and the direct the participation of the Universidade de São Paulo (USP) and FAPESP in Brazil and North-West University in South Africa

The Cherenkov Telescope Array (CTA) is a global initiative to build the world’s largest and most sensitive high-energy gamma-ray observatory with 118 telescopes split between two sites: one in the northern hemisphere on the island of La Palma, Spain, and the other in the southern hemisphere near Paranal, Chile. More than 1,400 scientists and engineers from 31 countries across five continents and more than 200 research institutes are participating in the CTA project. CTA will be the foremost global observatory for very high-energy gamma-ray astronomy over the next decade and beyond and will be the first ground-based gamma-ray astronomy observatory open to the world-wide astronomical and particle physics communities. CTA will address some of the greatest mysteries in astrophysics, seeking the origin and role of relativistic cosmic particles, probing extreme environments and exploring physics frontiers.