At a time when India was fighting to break free from the shackles of colonial rule, a brilliant young woman in that very country was quietly fighting her own battles. Bibha Chowdhuri was born in 1913 in Kolkata, in erstwhile British India, into a family of social reformers. The prevailing culture of religious dogmatism and social discrimination at the time prevented women from receiving any education. Amidst such cultural stigma, Bibha’s education was made possible by her progressive upbringing, which enabled her to obtain a Master’s degree in physics from the University of Calcutta in 1936, as the only female student in her class. Later, she would become the first Indian woman to pursue a Ph.D. in physics. These achievements, however, did not mean she had an easy path ahead in her quest to find a position after graduation. It was only after a lot of persuasion, that she was hired to be part of the new cosmic-ray research group of Prof. D.M. Bose in Kolkata. 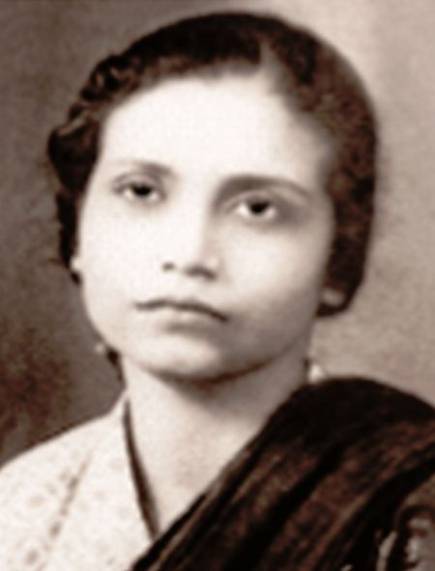 Bibha’s arrival to the research world came when fundamental particle physics was making rapid progress. In an era before the advent of human-made particle accelerators, cosmic rays coming from outer space were the principal source for studying high-energy interactions. The first part of Bibha’s work involved understanding the nature and composition of the cosmic rays, which nowadays we know are very energetic particles, composed mainly (99%) of protons and helium nuclei. To investigate the effect of the atmosphere on the flux of these particles, Bibha and Bose rode mules together high into the Himalayas to visit stations for their studies — a potentially scandalous act for unmarried Bibha in 1930s India. They set up their experiment at three different altitudes, reaching 4300m! The idea was to expose “halftoned” photographic plates to the cosmic rays for long periods at these altitudes and observe the particle tracks left behind.  The painstaking analysis of these photographic plates hinted at the presence of a hitherto unknown particle, which they believed to be the “mesotron.” They reported their results in four rapid publications in the prestigious journal Nature, and even tried to estimate the mass of this particle. The value of the mass was underestimated, but they were actually quick to caution that their set-up was not sensitive enough to provide accurate measurements and advocated the need for further experiments.

Unfortunately, the outbreak of World War II in Europe in 1939 led to an embargo in obtaining photographic plates from England, and their research had to be discontinued. In post-war England, Cecil Powell and his group continued these studies using improved photographic plates in balloon and high-aircraft experiments, leading to the detection of a new particle called the “pion,” winning him the Nobel Prize in 1950. Despite Powell’s strong acknowledgement of the work of Bose and Chowdhuri, including in his book “The Study of Elementary Particles by the Photographic Method,” the latter duo was pushed into obscurity.

Not one to give up, Bibha continued her research by joining the lab of Sir. P.M.S. Blackett in Manchester, UK for her PhD in 1945. At that time, Blackett and his collaborators were studying certain highly energetic components of cosmic rays called “penetrating showers.” Bibha undertook the study of these showers and calculated their density using innovative experimental techniques combining the Wilson cloud chamber and Geiger-Muller counters. Her thesis titled “Extensive Air Showers associated with Penetrating Particles” was submitted in 1949. This was a few months after Blackett had won the Nobel prize “for his development of the Wilson cloud chamber method, and his discoveries therewith in the fields of nuclear physics and cosmic radiation.” It is unclear how much of her work contributed to his award. What is at least known is that her thesis examiners, Janossy and Wilson himself, were impressed enough to recommend her to Dr. Homi Bhabha for a position at the prestigious Tata Institute of Fundamental Research in Mumbai (TIFR), India. At TIFR, she became the first female faculty member, and was placed in-charge of the Cloud Chamber Group where she continued her investigations on cosmic air showers.

Bibha left TIFR in 1954 and spent a few years at the Ecole Polytechnique in Paris, teaching Physics in French and working with multi-plated cloud chambers in the French Alps. Thereafter, she moved to the U.S., first to the University of Michigan, and then to MIT, collaborating with Prof. Bruno Rossi on prototyping Plastic Scintillators for detecting large air showers.

Upon her return to India, she joined the Physical Research Laboratory (PRL) in Ahmedabad and worked towards setting up the Kolar Gold Field Experiment, which led to the first detection of atmospheric neutrinos. She had plans of setting up further experiments for cosmic ray research in India with Dr. Vikram Sarabhai, the father of the Indian space program. However, these plans had to be abandoned due to the sudden and untimely death of Sarabhai in 1971. Soon after, she left PRL and returned to her birth city, Kolkata, where she was to spend the rest of her days. She remained active in science till her death in 1991.

Despite her pioneering contributions in the field of cosmic ray research, Bibha received no recognition in India. Only recently, almost three decades after her death, her biography “Bibha Chowdhuri, eine indische Hochenergiephysikerin als “Star” am Himmel” (“A Jewel Unearthed: Bibha Chowdhuri” in English) got published by a German press. In 2018, the International Astronomical Union honoured her by naming the white dwarf star HD 86081 “Bibha.” Bibha, which means a “ray of light” in Bengali, will now forever shine bright in the sky!