Margherita Hack: Astronomer and Changemaker, now has her own Statue

Written by Anna Wolter with the collaboration of Claudia Mignone (INAF)

Able to explain complex ideas using a simple language. Widely known and easily recognizable by many. Lover of animals and bicycles. Driven by the desire to always go a step further, by the curiosity to understand and explain something that is still a mystery. Always ready to get involved and to do it with her own hands. Aware of our place in the Universe: a small, inhabited grain of sand.

This, and much more, was Margherita Hack, or Marga to her husband and close friends. She was born in Florence in 1922, where she studied in the 1940s, during the Second World War, with a thesis in observational astronomy. She worked a few years at the Brera Observatory of Milan where she did not find the equipment and support she would have liked. Finally, in 1964, she won the chair of Astrophysics at the University of Trieste, which brought as a “gift” the position of Director of the Astronomical Observatory. Lo and behold: Margherita Hack became the first woman in Italy to run an Astronomical Observatory! A milestone for women in science. Under her leadership, the observatory would turn from a small, provincial institute to a lively and active international research center.

It is difficult then to know which of her characteristics captured more the imagination of the Deloitte Foundation when they selected her as the “role model” – a female scientist for whom they would erect a statue, the first in Italy, where statues of women already exist but as goddesses and madonnas, representations of ideals or abstract concepts. I was honoured to be involved in the selection process, in a diverse panel of artists, municipality managers, scientists and various intellectual figures. Sissi, the winning artist, inspired her design in the long periods spent listening to Margherita’s voice,  becoming identified with her,  understanding her essence. And finally, on June 13, her work was unveiled, which the city of Milan has destined to the gardens facing the Università Statale. The statue will be seen by thousands of students passing by as they seek their own path in life, every day.

We will ask ourselves, in the years to come, how effective this statue of Margherita has been as a reference and as a role model for girls and boys. As we reflect on why her figure  is so representative, we are aware that Margherita Hack did not make any particular scientific discoveries, even if her work is highly respectable, like that of many colleagues. However, she achieved her results and made an impact by keeping an open eye towards the world and innovation. For example, she did not have an easy life at the Brera Observatory, because she did not appreciate the study of classical astronomy, then carried out by her colleagues with the Merate telescopes. However, through collaborations – mostly international ones, from France to Holland and then again in the United States, from Berkeley to Princeton – she learnt and developed the study of spectroscopy as a tool to investigate the physical state of celestial sources. In the 1970s and 1980s, she took advantage of the IUE mission (a satellite for observation in the ultraviolet band) to revamp the Trieste Observatory, involving it in international research and pushing it towards one of the most cutting-edge disciplines of contemporary astrophysics: space science. She was a real manager. She knew how to unite the people working in the institute and to push them in their career, fostering their independence. 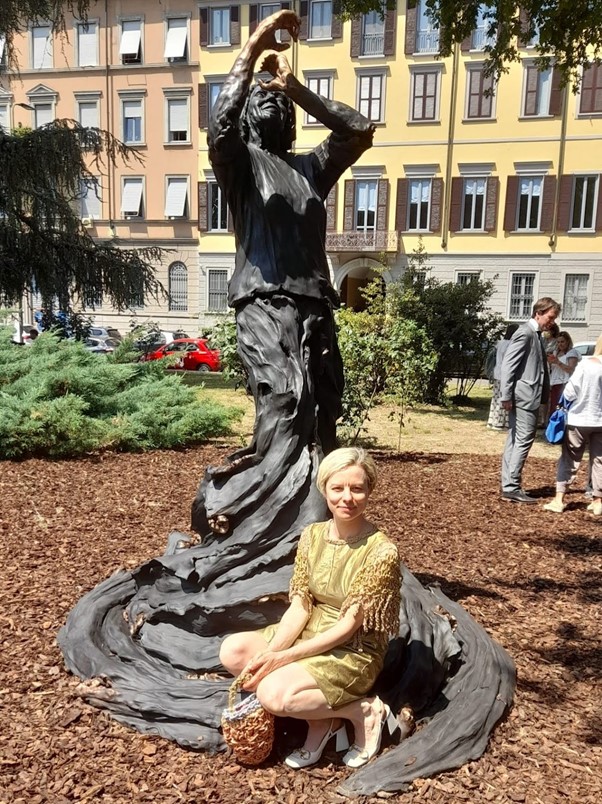 The day of the inauguration of the statue: Sissi with her creation. Credits: Anna Wolter

Always active in the communication of science to the general public, from print media to books and later television, she became even more active in outreach after her retirement, from the direction of the Observatory in 1987 and then, ten years later, from the Department of Physics and Astronomy of the University of Trieste. In her relationship with the public, she showed an uncommon capacity for inclusion and openness. She was always attentive to the rights of all, fighting battles for civil and minorities rights.

I think that much of her attention to others, and also the ability to not fall victim to stereotypes, comes from her family atmosphere and environment. She came from a non-traditional family in which, for political reasons (during intense fascist times), had a father that did not work, but lives peacefully the fact that it is the wife who provides for the sustenance of the family. Therefore, she had a caring father, but also the influence of broad cultural views and a proponent of freedom. They were also a vegetarian family out of respect for animals. In short, I suspect that Margherita didn’t even experience stereotypes in her childhood, and this made it, perhaps, an easier task for her to care for all.

Today, I wonder if the one represented in the statue is the right gesture to remember the work of an astrophysicist who has always looked at the essence of things (spectroscopy, in fact, to put it in scientific terms) and not at the appearance or classification (the “classical” astronomer who measures the positions of stars in the sky). I urge our scientific community to devise in the next few years a new gesture that represents the work we do here, today, with large telescopes and observatories such as CTAO. A gesture that is able to simultaneously grasp the charm of the knowledge of refined detail and the complexity of the framework in which it is inserted.

Certainly, I would like to emphasize that Margherita Hack was not a “genius” in the sense of being so out of the ordinary as to be unattainable, inimitable. Margherita is each and every one of us, with her bad temper, when needed, with her smiles, all the more often, with the desire and tenacity to get, with the curiosity to find her own way, the desire to make things with her own hands. May the Universe continue to teach us new facts. She is a symbol, a model, an “undisputed myth,” a recognizable and accessible figure. And don’t forget: “Heaven has always been an open book,” as the commemorative plaque says. Let’s keep learning how to read it.