Born in Serbia in 1981, Mirjana Pović excelled in primary school, where she loved mathematics and biology. Very early on she was delighted by observing the stars in the night sky. Starting when she was nine, she grew and became an adolescent embedded in the Yugoslav wars and their consequences. She said that “when you grow up in chaos, with so many unanswered questions, you feel so constricted, so locked in, that reading books, walking in nature and looking up at the night sky is a way to escape so much madness.”

Thus, Mirjana decided to study Astrophysics, expecting to understand the processes behind the beauty of the night skies. With the encouragement of her family, and the required grants, she earned her PhD in extragalactic astrophysics at the Instituto de Astrofísica de Canarias (IAC) in Spain. And this is where her childhood passion for Africa bloomed – amazed by its beauty and diversity but disturbed by the inequalities. Her desire to help, led her to Tanzania to teach in the slums, and to instil in the children that education can change their lives.  After her thesis, she spent a year as a postdoc in South Africa, at the University of Durban. She came to Granada (Spain) for a meeting about Active Galactic Nuclei (AGN), and she was offered a postdoc at the Instituto de Astrofísica de Andalucía (IAA), where she spent six years. She never stopped her involvement with the various projects already started in Africa, spending her holidays there to do volunteer work with children. 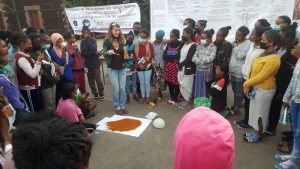 During her many humanitarian trips, she also made contacts with young African astrophysicists trying to develop the discipline in their own countries, like Rwanda and Ethiopia. Finally, she decided to move to Addis Ababa (Ethiopia) in 2016 as a researcher in the Ethiopian Space Science and Technology Institute. Recruited for her experience in the field and knowledge of Africa, she is the only woman and the only European on the team. Since 2016, she has been working hard to develop the space sector in Ethiopia, sometimes under very difficult conditions, including the ongoing civil war in the region of Tigray, northern Ethiopia.

Despite the challenges, she has made an enormous impact on the academic and societal conditions in Ethiopia and throughout the continent through her contributions to the organisation of the institute; the country’s science sector strategy for the next 20 years; the generation of skills in astronomy and space science, technology and research; the popularisation of astronomy among the general public; and the inclusion of women and girls in science. Mirjana organised an IAU symposium on AGN for the first time in Addis Ababa in October 2019, the third IAU symposium held in Africa. She also has supervised more than 20 master and PhD students. Among other responsibilities, she serves currently as a secretary of the IAU Division C on Education, Outreach and Heritage. In 2019, she promoted the “STEM for GIRLS in Ethiopia” initiative, with the aim to inspire more girls to do science, technology, engineering and mathematics. In collaboration with the African Astronomical Society, she co-founded the African Network of Women in Astronomy, and has been its main coordinator since its establishment in 2020. 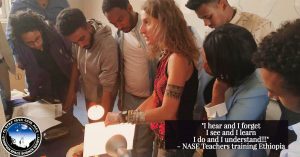 Among the various awards Mirjana has received for such an amazing and impressive body of work, there are two that stand out for their international scope: The first, awarded in 2018, was the “Nature Research’s Inspiring Science Award” for which she impressed judges with her capacity to excel in her own research, as well as with the depth and breadth of her efforts in Africa to encourage women and girls in science. The second was the Inaugural 2021 Jocelyn Bell Burnell Inspiration Medal from the European Astronomical Society, awarded to Mirjana for her work in developing astronomy, science and education as a route out of poverty and to improve the quality of life for young people in Africa. Both are a result of Mirjana Pović’s deep conviction that through education, science and technology we can combat poverty in the long term and make our world a better place for everyone.