Sally Ride: The Sky is No Longer the Limit

When I was a child, I wanted to be an astronaut. I love to talk about it. I am proud of myself because I am currently an astrophysicist, which is, in a sense, somehow similar. It is clear that I was totally fascinated by the sky at first, but this soon turned into a fascination with the Universe.

I remember when I was still at school, deciding which Bachelor’s degree to pursue. I checked all the requirements to be an astronaut on the European Space Agency (ESA) and the National Air and Space Administration (NASA) webpages. Unfortunately, I came across something that could potentially destroy my dream of becoming an astronaut: myopia. Myopia is a common vision condition that can be described as blurred vision when an object moves further away from a person. The webpage states it clearly: an astronaut candidate needs to have perfect vision. Astronaut candidates must not have a history of having glasses, contact lenses, laser or eye surgery. In my eyes, this was the end of my dream. I am still wondering if something has changed, in the meanwhile…never say never!

In January 1977, Sally Ride experienced a similar feeling while finishing her PhD in Physics, spotting an article in a newspaper advertising that NASA was recruiting a new group of astronauts for the Space Shuttle program and that – for the first time – women could apply! She knew immediately she wanted to fly into space. Ride was one of the 8,079 applications received by NASA, and despite the competition, she became the first American woman and third woman ever to go to space.

Before we go any further, let us take a step back. Before Sally Ride decided to study Physics and become an astronaut, she was working towards a career as a tennis player. Her perfect physical shape actually helped her pass the astronaut selection process. During this period, she met Tam Elizabeth O’Shaughnessy, a tennis player and scientific writer, who was her partner in life for 27 years, until her death in 2012. Sally and Tam became growingly concerned about the lack of women in science. They understood that girls needed more role models to pursue and succeed in this field. As Sally liked to say, “You can’t be what you can’t see.” This is a quote that is still valid nowadays as it was more than 40 years ago. 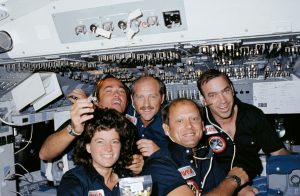 In fact, as the first American female astronaut assigned to a space shuttle crew, Sally got the attention of the media and had to deal with questions like “Do you weep when things go wrong on the job?”. She stayed calm and answered, “How come nobody ever asks Rick these questions?” Rick Hauck, her crew mate.

In 2001, Sally and Tam founded the non-profit organisation “Sally Ride Science.” They created programs to inspire girls and boys of all backgrounds in science. Today, the “Sally Ride Science” is part of the University of California, San Diego, where Sally became a Professor in Physics after leaving NASA. The year after Sally died, Tam accepted the Presidential Medal of Freedom from President Obama on behalf of Sally, the American highest civilian honor.

Sally Ride was, and still is, a role model in the scientific field for the generations that followed her (including mine). She was not only a pioneer in space travel, helping open that field to other women, but she was also a scientist committed to gender equity, promoting the scientific career among girls and women, and encouraging young people to stay in science as they go through their career. She is one of the leading figures on which we build the future in science.