Catching Gamma-Ray Bursts with CTA? Yes we can!

Originally published in the October 2019 issue of the CTA Newsletter.

Very high-energy (VHE) gamma rays, like the ones that CTA will catch, are produced in many different astrophysical environments. They originate from very energetic particles and, as such, provide glimpses into extreme astrophysical phenomena. Among the most extreme sources in the Universe, gamma-ray bursts (GRBs) lead the pack. They are produced following the formation of jets travelling with velocities close to the speed of light ejected by newly-born compact objects (such as neutron stars or black holes, see Figure 1). Thanks to observations from ground-based telescopes and space missions, we know that GRBs produce an emission over a wide range of frequencies, from the radio band up to gamma-ray energies. Most of this emission is thought to be synchrotron radiation from energetic electrons moving in spiral pattern around magnetic field lines. At very high energies (VHE, >100 GeV) synchrotron radiation is not expected to play a role, but other mechanisms have been theorised to produce a detectable amount of VHE radiation. The most important one is the Inverse Compton, where photons collide with the energetic electrons and gain energy in the process. This mechanism can be more or less relevant, depending on the conditions of the region where the radiation is produced, which in GRBs are still poorly understood. 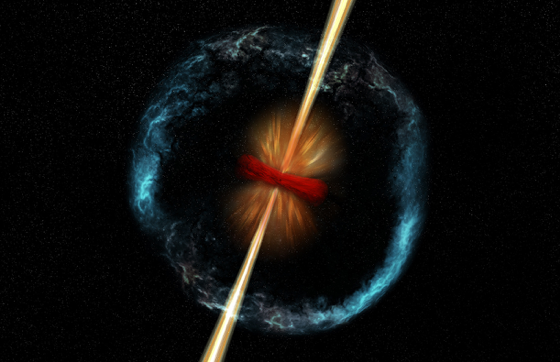 This illustration depicts the generation of a GRB jet. The compact object — either a black hole or a massive neutron star — is located in the centre. Materials from the disk (in red) fall towards the compact object. This accretion process drives the launch of two opposite jets (in yellow).
Credit: NASA/CXC/M. Weiss

Curiously, even though GRBs are the most powerful sources in the Universe, all the efforts to detect VHE radiation arising from them have failed for many years. Considering that GRBs are cosmological sources located at an average redshift of z=2, the flux of VHE photons (if produced) will be strongly attenuated by the encounter with visible-IR light, making their detection on Earth very difficult. Thus, the question whether this radiation is produced or not, in what amount, how common it is, and which maximum energies can be attained remained unanswered for a long time. As a consequence of these uncertainties, the role of CTA on the study of GRBs was not easy to predict. On the one hand, CTA’s sensitivity down to 20 GeV assures that GRBs can be detected, since the existence of emission at these energies has already been proven by the satellites Fermi and AGILE. On the other hand, the detection rate and the energy up to which GRBs will be detected strongly depend on whether or not an emission component at VHE exists.

Since January 2019, CTA predecessors MAGIC and H.E.S.S. have announced detections of radiation well above 100 GeV from three GRBs [1,2,3], finally proving that this kind of radiation is indeed produced and might be a quite common component in the radiative output of GRBs. Thus, the consequences on the prospects for GRB detections with CTA are enormous. In light of these recent discoveries, it is reasonable to expect that GRBs will be interesting targets both for the Large-Sized Telescopes (LSTs) and the Medium-Sized Telescopes (MSTs), responsible for low and medium-energy sensitivities of CTA (from approximately 20 GeV to a few tens of TeV in total). The lower energy threshold assures that, compared to the GRBs detected by MAGIC and H.E.S.S. (located at z=0.0785, z=0.424 and z=0.653), CTA will be able to detect signals from even greater distances, where the GRB rate is higher. Finally, the long-lasting duration of the VHE emission (detected up to several hours [2]), coupled with CTA’s unprecedented sensitivity, implies that GRBs that can be pointed only several hours after the initial burst might still be well detectable. The GRB detection rate at VHE is then expected to largely increase with CTA, enabling researchers to fully exploit this new window of investigation on GRBs.

CTA observations are expected to have a large impact on GRB science and provide information on the amount of energy carried by the VHE component, its spectral shape and temporal evolution, and on the presence of internal absorption affecting the intrinsic spectral shape. These observations can be used to unveil important physics, such as the source density and magnetic field strength, the energy of the emitting electrons, and the jet Lorentz factor (i.e. the velocity of the jet), thus bringing new information on shock wave physics, GRB environments and jet properties.

In light of the MAGIC results on GRB 160821B [4], the prospects for detection of VHE radiation from short GRBs are also very promising. Because short GRBs are connected to the same sources that produce gravitational waves, there is a direct link between CTA science and gravitational waves, which strengthens the role of CTA in this exciting new era of multi-messenger astrophysics.