CTA Consortium Meeting Comes to a Close in Bologna

During the week of 24 October 2016, nearly 250 CTA Consortium members from 25 of its 32 member countries from around the world came together in Bologna, Italy to discuss the science and construction of CTA. The CTA Consortium includes 1,350 members from 210 institutes in 32 countries. This group of institutions is currently responsible for directing the science goals of the Observatory and is involved in the array design and supplying components (as in-kind contributions). The meeting consisted of a mix of parallel and plenary sessions with topics ranging from reports from the project work packages and CTA Project Office to Observatory operations and detailed science goals of CTA. 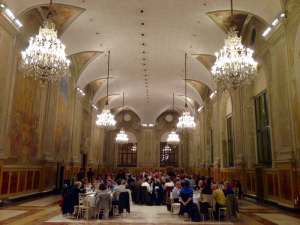 The meeting was hosted by INAF/IASF-Bologna at the Conference Centre of the Bologna CNR-INAF Research Area, which is the location of CTA’s new headquarters (estimated to open in 2017). Special thanks to Pino Malaguti (INAF/IASF-Bologna Director) and Vito Conforti for meeting coordination and organisation.

Left, in addition to the daily meetings, the attendees were treated to a traditional Bolognese dinner on 26 October at the Palazzo Re Enzo in Bologna’s historic city centre.

The Consortium meets bi-annually. The next meeting will be 15-19 May 2017 in Rio de Janeiro, Brazil.

For more images from the event, visit our Flickr page.