CTA Promoted to Landmark Status on the 2018 ESFRI Roadmap 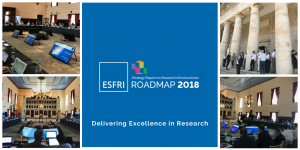 In early July, the European Forum on Research Infrastructures (ESFRI) made the decision to promote the Cherenkov Telescope Array (CTA) from the Project status to Landmark status on its 2018 ESFRI Roadmap. CTA was one of eight projects promoted to the current list of 37 Landmarks.

CTA was first included on the roadmap in 2008 and subsequently put under review for the 2018 update. In 2017, CTA responded to a questionnaire and provided supporting documentation to report on the project’s status and progress toward fulfilling key requirements and addressing the recommendations made by ESFRI in a 2015 assessment. After the evaluation of CTA submission by the ESFRI Working Group on Implementation and the Strategy Working Group for CTA’s research infrastructure, CTA was granted the status of ESFRI Landmark in the ESFRI Roadmap 2018 at its 65th Plenary Forum Meeting in Corfu, Greece.

“We are delighted and honoured to be granted the Landmark status by ESFRI,” said CTAO Managing Director, Federico Ferrini. “This high level of support is just further confirmation for everyone involved in CTA that we are building a world-class facility that will revolutionize what we know about the Universe.”

According to the ESFRI website, ESFRI “is a strategic instrument to develop the scientific integration of Europe and to strengthen its international outreach. The competitive and open access to high quality Research Infrastructures supports and benchmarks the quality of the activities of European scientists, and attracts the best researchers from around the world.”

“I am very pleased to see the recognition by the ESFRI evaluation committee of the progress achieved by CTAO. And with the confirmation of commitments by several members, we are progressing towards CTAO-ERIC, expected to be launched at the very beginning of 2020,” said Gabriel Chardin, Chair of the CTAO Council. “This will coincide with the start of construction of a gamma-ray observatory that will be a world reference at very-high energies for the next 30 years.”

The ESFRI Roadmap 2018 will be officially presented to the public in a dedicated event, under the Austrian Presidency, on 11 September 2018 at Aula der Wissenschaften in Vienna.