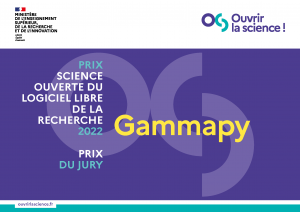 On 5 February 2022, the open-source Gammapy software package, on which the official Cherenkov Telescope Array Observatory’s (CTAO’s) science analysis tools are based, was awarded by the French Ministry of Higher Education, Research and Innovation with the Jury Prize during the first Open Science Awards for Open-Source Research Software. The award, which made part of the Open Science European Conference (OSEC), highlights Gammapy as an exemplary project for its technical quality, available documentation and leadership within the community.

In the past years, researchers and large-scale infrastructures from all science fields, including astrophysics, have been promoting open-source software and driving towards the FAIR (Findable, Accessible, Interoperable, and Reusable) principle to allow users worldwide free access to source codes and to support open science globally. To recognize projects and research teams that contribute to this major common good and serve as examples for the next generations, the Ministry of Higher Education, Research and Innovation in France, in collaboration with other prestigious partners from France, presented the first Open Science Awards for Open-Source Research Software. Among the 129 candidate projects, Gammapy, an open-source Python package used for the gamma-ray astronomy data analysis on which the official Science Tools for CTAO will be based, received the Jury Prize in this first edition of the awards.

“This prize is a wonderful recognition of the quality of the work done over the years by all Gammapy developers, as well as of the fruitful connection with users and the community working behind the scenes on a common data format shared by many gamma-ray experiments,” says Bruno Khélifi, Gammapy Project Manager at APC/CNRS. “We are happy to be selected for the award among so many other great open-source projects. It is a recognition of both our work and the work of the scientific open-source software community in general,” adds Axel Donath, Gammapy Lead Developer at Cfa/Harvard. “Gammapy could not be successful without the other open-source projects we build on, collaborate with and share the common vision of a more transparent and reproducible science for the future.”

The prizes, awarded by a jury composed of ten renowned experts in the field, were divided into four categories: Scientific and Technical, considering the quality of the software; Community, based on the contribution to an active environment; Documentation, attending to the efforts to provide appropriate documentation to the users; and the Jury Prize, awarded to Gammapy, which rewards projects that stands out in all aforementioned categories.

“We are very glad that all these years of hard work carried out by the Gammapy team are recognized through this award,” says Matthias Füssling, CTAO SUSS (Science User Support System) Coordinator. “From CTAO, we will continue to work together and support the development and improvement of Gammapy as a key element for the CTAO’s operation and data analysis.”

In June 2021, Gammapy was selected as the CTAO Science Tools, a software package for the scientific analysis of the CTAO data. It is one of the core products that the CTAO will provide to the worldwide science community during the lifetime of the Observatory, as the interface to that community and a set of the highest quality software tools with documentation and tutorials that will allow any user to analyse CTAO data. Moreover, Gammapy plays an integral role in the science operation workflows of the CTAO itself, as part of the pipelines for science verification.