Hadrons or Leptons? That is the question! 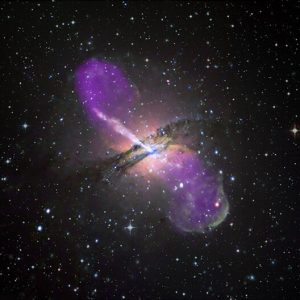 This Chandra image of the nearby galaxy Centaurus A provides one of the best views to date of the effects of an active supermassive black hole. Opposing jets of high-energy particles can be seen extending to the outer reaches of the galaxy. Image credit: NASA/CXC/CfA.

Extragalactic (from outside our galaxy) jets shine across the entire electromagnetic spectrum, emitting radiation from radio waves up to very high-energy gamma rays. In the past decades, astrophysicists have been able to grasp several aspects of the functioning of these structures, thought to be launched by rotating magnetic fields close to the horizon of supermassive black holes.

One of the most basic questions about jets is the one related to the nature of the radiating particles and the mechanisms at the base of the emission that we observe. While there is wide consensus on the fact that the radiation at the lowest frequencies (from radio up to soft X-rays) originates from electrons spiraling in the jet magnetic field (synchrotron radiation), more debated is the source of the photons detected as gamma rays. It is often assumed that the main emitters are electrons (leptons), producing gamma rays through the scattering of low-energy photons (inverse Compton emission). On the other hand, there are also several supporters of the alternative idea, the hadronic scenario, which envisions gamma rays as the by-product of reactions initiated by protons (or other nuclei) smashing into other nuclei or low-energy photons. The idea is quite appealing: the discovery of the presence of protons accelerated to the highest energies could also open the way to the identification of the still mysterious sources of the ultra-high-energy cosmic rays that bombard the Earth’s atmosphere.

The difference between the properties of the radiation deriving from the two processes is quite minute. Only with very accurate measurements of the spectrum at TeV energies can one hope to firmly identify the underlying emitters (see below figure). Current Cherenkov telescopes do not have the sensitivity required for this difficult task. CTA, with its improved sensitivity, will be able to provide a definite answer to the question. In fact, this is one of the goals of CTA’s active galactic nuclei (AGN) key science project, which foresees the accurate spectral measurement of blazars, hosting powerful jets pointing at the Earth.

The figure above (extracted from Science with the Cherenkov Telescope Array, arXiv:1709.07997; see also A. Zech, M. Cerruti, D. Mazin, 2017, A&A, 602, A25 for a recent update) shows the spectrum expected for the hadronic (left) and the inverse Compton (right) scenarios for the gamma ray emission of the blazar PKS 2155-304. The black symbols show the data currently available from Fermi/LAT (below 1025 Hz) and H.E.S.S. Detailed simulations with CTA (red points) show how the combination of the large energy band coverage with the excellent energy resolution and high event statistics up to the highest energies will allow us to discriminate between the hadronic and the leptonic emission scenarios in these types of sources.