Originally published in the May 2019 issue of the CTA Newsletter.

Recent discoveries of high-energy cosmic neutrinos and gravitational waves have put multi-messenger astronomy in the spotlight. Now, the world-wide science community is looking forward to seeing results from CTA, the next generation ground-based gamma-ray detector, which is anticipated to provide a wealth of new information with unprecedented precision.

Especially important for multi-messenger astronomy was the detection of gamma rays associated with a high-energy neutrino, IceCube-170922A, attributed to the Blazar TXS 0506+056 [1]. More than twenty instruments reacted to the neutrino alert and contributed to disclosing its astrophysical nature (see Fig. 1). 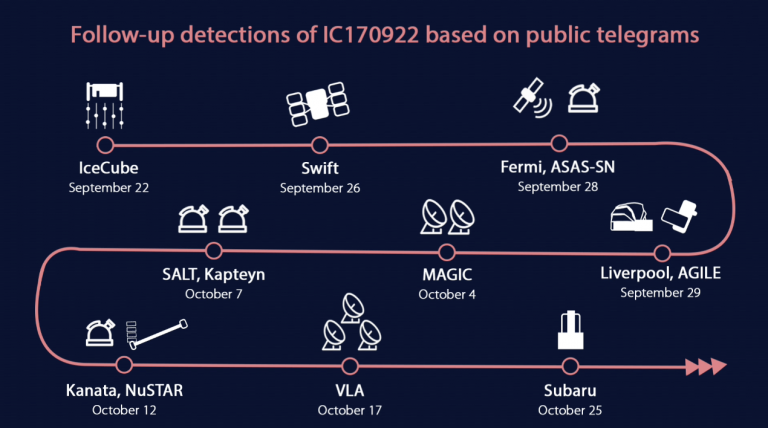 Figure 1: Timeline of the multi-messenger Astronomer’s Telegram announcing some of the follow-up observations triggered by the IceCube-170922A event alert. Credit: IceCube Collaboration

The event was a breakthrough in multi-messenger synergy, combining information from different types of particles and waves to reveal the physical processes behind extreme astrophysical phenomena. High-energy neutrinos with energies larger than a few GeV are the products of protons or ions (hadronic cosmic rays) interacting with surrounding matter or radiation. A fraction of those cosmic rays may escape their astrophysical sources, but, since they are charged particles, they will be deflected during their propagation by intergalactic magnetic fields. Neutrinos, as neutral particles, keep memory of their source’s direction and, hence, their detection have become crucial to unraveling the origin of this type of cosmic ray.

Nevertheless, capturing cosmic neutrinos is a difficult task. Large-scale detectors are needed to detect these weakly interacting particles, like the current IceCube at the South Pole, ANTARES in the Mediterranean Sea and Baikal at Lake Baikal. Despite being instrumented at important depths with enormous volume, such instruments are challenged by weak signals and strong foregrounds induced by cosmic-ray interactions in the Earth’s atmosphere. Still, in 2013, the discovery of a diffuse flux of high-energy neutrinos was reported by the IceCube Collaboration [2]. This result is a clue towards finding the long-sought sources of hadronic cosmic rays, but long-exposure neutrino sky maps do not yet show significant indications of individual sources. So far, only the object class of a single high-energy neutrino source, the aforementioned Blazar TXS 0506+056, was identified. Thus, the origin of the bulk of cosmic neutrinos remains a mystery.

The chances to capture the faint source of neutrinos can be increased by observing transient phenomena, simultaneously with other high-energy messengers like gamma rays. Since gamma rays and neutrinos can be produced in connection to each other at the same source, by catching the electromagnetic signals emitted quasi-simultaneous to neutrinos, the time- and space-coincidence of both messengers significantly removes the cosmic-ray atmospheric foregrounds that challenge the neutrino detectors. Gamma rays, like neutrinos, do not have a charge so their trajectory can be traced back to their origin, as well. They are much easier to detect, allowing gamma-ray detectors to provide more accurate information about the source’s location in the sky, but they are produced by different physical processes involving different types of particles. In this regard, neutrinos serve as smoking guns for high-energy hadronic cosmic rays. Their combined study, also along with other wavelengths, provide a unique view on high-energy sources, as happened in the case of the IceCube-170922A event [see e.g. 2].

The CTA Key Science Projects include a dedicated program to investigate neutrino transients to expand our knowledge in this field. Along with current and future neutrino observatories (such as the next generation IceCube-Gen2 and Baikal-GVD), CTA’s detection of very high-energy gamma rays associated with cosmic neutrinos will play a key role in unveiling possibly new neutrino-emitting sources, as well as helping to reveal the origin of ultra-high-energy cosmic rays. With a sensitivity that is about 10 times better than any existing gamma-ray instrument, reaching energies up to 300 TeV, CTA will address the origin of TeV-PeV cosmic neutrinos beyond the edge of the known electromagnetic spectrum. This will open the window to the study of different transient events, like tidal disruption events, in which a star is swallowed by a supermassive black hole, low-luminosity gamma-ray bursts or supernovae with strong interactions with circumstellar material. The program is tailored to address transient phenomena and respond to alerts issued by neutrino observatories, such as IceCube, in a modern version of the so-called Neutrino Triggered Target of Opportunity (NToO) program.

CTA will also employ a real-time analysis to search for unexpected gamma-ray signals, which will allow CTA to generate and release alerts to other observatories to avoid missing any interesting cosmic event (Fig. 2). This will strengthen the multi-messenger cooperation in the upcoming years and ensures new discoveries that will increase the understanding of our Cosmos and the physical processes therein.

Figure 2: CTA dataflow from the data acquisition on-site, including the real-time analysis and alerts between observatories. Credit: CTAO