During 21 and 22 June, the LST1 prototype, which is under construction at the Roque de los Muchachos Observatory on La Palma in Villa de Garafia, hit another structural milestone when its camera support structure (CSS) was installed. With the addition of the CSS – the parabolic arc holding the camera on the mirror dish – the LST is taking its final, spectacular form.

The CSS was designed and produced by LAPP, France, and is made of carbon fibres to keep the large structure stable, light-weight and to reduce the amount of shadowing on the telescope camera. The tube and camera frame were produced by Lorima, a french company specialising in masts for racing boats. A large crane reaching 70m high was brought in from Tenerife for the installation, which required securing and stabilizing the CSS on the mirror with 26 carbon-fibre ropes. The ropes were procured by INFN Padova from Future Fibres, which specializes in cables for racing boats.

The trickiest part of the installation was releasing the crane from the CSS, which had to be done about 50m above the ground. Because this was out of range of the articulated boom available on site, the LAPP team spent several years training in climbing to complete the operation. After the CSS was installed and the tension ropes fixed and slightly pre-tensioned, two of the engineers carefully climbed along the CSS like spiders on a web to release the crane. 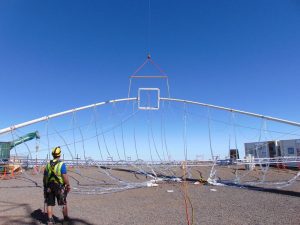 Lifting of the CSS and the 26 tension cables. 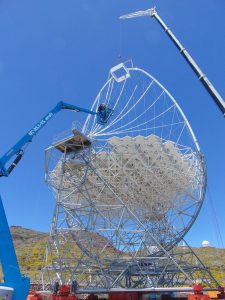 CSS is positioned with 70m crane. 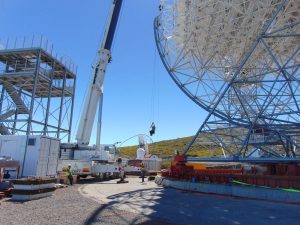 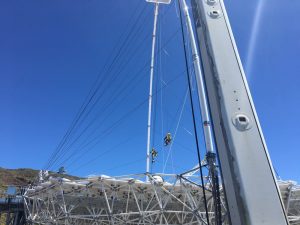 In the next step, the telescope will receive its engine – azimuth and elevation motors – and then it

will be turned back to the park position to allow for the installation of the remaining mirrors and the active mirror control system (July/August). In September, the telescope camera will be installed and final preparations will be made for the LST1’s inauguration on 10 October.

Learn more about the LST and watch the construction live on the site’s webcam.