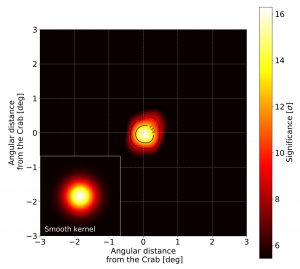 In its first attempt to detect a gamma-ray source, the Large-Sized Telescope prototype (LST-1) successfully detected its first gamma-ray signal on 23 November 2019 when it pointed to the Crab Nebula, which is considered the standard candle in very  high-energy  astronomy. Preliminary analyses show a very clear detection of a gamma-ray signal coming from the source, reassuring the team’s expectations that the telescope is performing as designed. These results are being discussed at the LST General Meeting that is taking place this week in Marseille, France. Right: the two-dimensional excess map of the gamma-ray excess from the direction of the Crab Nebula at an exposure of 269 min. (Credit: Rubén López-Coto, LST Collaboration)

Above: The time development of the gamma-ray signal in one run (30-min exposure) on the Crab Nebula on 23 November 2019. (Credit: Rubén López-Coto, LST Collaboration)

The LST team (pictured  below) consists of more than 200 scientists from 11 countries: Brazil, Bulgaria, Croatia, France, Germany, India, Italy, Japan, Poland, Spain and Switzerland. The LST-1 was inaugurated in October 2018 and has been undergoing commissioning testing ever since. Soon after the inauguration, the prototype detected its ‘first light’ on the evening of 14-15 December, but this is the first detection from a gamma-ray source.

The LST-1 will be one of four LSTs located on the CTA-North array situated on the existing site of the Instituto de Astrofísica de Canarias’ (IAC’s) Observatorio del Roque de los Muchachos in Villa de Garafía on the island of La Palma, Spain. The four LSTs arranged at the centre of both the northern and southern hemisphere arrays will cover the low-energy sensitivity of CTA between 20 and 150 GeV. Although the LST-1 has a 23-metre diameter reflective surface, stands 45 metres tall and weighs around 100 tonnes, it is extremely nimble, with the ability to re-position within 20 seconds to capture brief, low-energy gamma-ray signals. Both the fast re-positioning speed and the low energy threshold provided by the LSTs are critical for CTA studies of transient gamma-ray sources in our own Galaxy and for the study of active galactic nuclei and gamma-ray bursts at high redshift.

The prototype is foreseen to become the first CTA telescope once the LST-1 has completed its critical design review and is formally accepted by the CTA Observatory (CTAO).