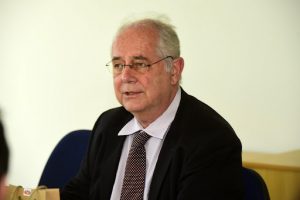 It is with deep sadness that we acknowledge the passing of our dear colleague Prof. Ronald Cintra Shellard on 7 Dec 2021. Prof. Shellard was a pioneering and leader in Very High-Energy Astrophysics and Astroparticle Physics in Brazil. He was strongly involved in many projects for the exploration of cosmic and gamma rays, including the Pierre Auger Observatory and the Southern Wield-field Gamma-ray Observatory (SWGO). Since 2015, Prof. Shellard was Director of the Brazilian Center for Physics Research (CBPF, in Portuguese), where he worked as a researcher for almost 30 years. Among his duties, he was also member of the Brazilian Academy of Sciences, the Astroparticle Physics Forum (APIF) and the Board of Directors of the Latin American Centre for Physics (CLAF).

Prof. Shellard was a member of the Cherenkov Telescope Array Consortium, where he participated since the early stages of the project, strongly promoting the Brazilian engagement in CTA. He served as member of the CTA Resource Board, participating in the CTAO site negotiations, and as Country Representative for Brazil in the CTA Outreach Committee.

Prof. Shellard will be remembered by his friends and colleagues for his natural leadership and tireless dedication to the Brazilian scientific development. We will miss his positivity, support and constructive character. Our thoughts are with his family, friends and colleagues in Brazil and all over the world.