From Footrace to Convergence: A United Effort Brings Construction Within Reach

Originally published in the December 2021 issue of the CTA Newsletter.

I am happy to report that the year 2021 started quite positively for the CTA Observatory (CTAO). In spite of the pandemic accompanying us and showing no clear signs of when it will leave, progress for the CTAO has been tangible on various fronts. From the political side, the advancement of funds that will allow us to launch the South site infrastructural work is a strong, positive message from our shareholder countries that so generously took this initiative. From the technical side, civil engineering studies are preparing for the realization of the sites’ infrastructure, while ongoing or concluded reviews are paving the road toward the mass construction of telescopes and cameras. From the managerial point of view, key new recruits are reinforcing the CTAO team.

As for the ERIC, the process that shall lead to the final application of CTAO’s legal entity to the European Commission, which started in the spring of 2018, is advancing through the numerous complex issues that should be fixed before the final step. We are moving closer to finalizing the preparation of policies and regulations that will conclude the transition from the present legal entity to the new one.

Even though we are progressing at a steady pace, the frequent challenges and bumps in the road bring out the philosopher in me. I am passionate about philosophy and like to refer to its wisdom often, especially the teachings of the early Greek philosophers. Among them, I find Parmenides and his school particularly interesting, including its most important representative: Zeno of Elea, who was well-known for the paradoxes he conceived to support monism, the Parmenides’ approach to interpret the physical world. 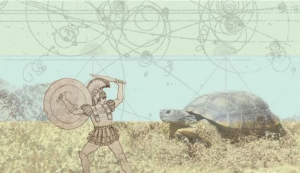 The most famous and interesting is the paradox of Achilles and the tortoise, who contrived to have a footrace. Achilles, sure to be much quicker, gave the tortoise a hundred-metre head start. In the time that it took Achilles to travel the

hundred metres, the tortoise moved ten, so that when Achilles got there, he found the tortoise still had a lead. No matter how many times Achilles advanced to the tortoise’s last position, the tortoise had moved forward a bit more by the time he got there. Zeno’s conclusion was that the slowest runner in the race, the tortoise, will never be overtaken by the fastest runner, Achilles.

Fortunately, Carl Friedrich Gauss developed a mathematical theory for the problem (the series converges, luckily!) and demonstrated the inconsistency of Zeno’s conclusion. I do not need to say now who, in our own scenario, is the tortoise and who is Achilles, but it is reassuring that the convergence of the groups and the process involved in our new legal structure is on the horizon so that we can, finally, put the full force of the CTAO and its resources behind building this spectacular observatory!