Originally published in the December 2020 issue of the CTA Newsletter. 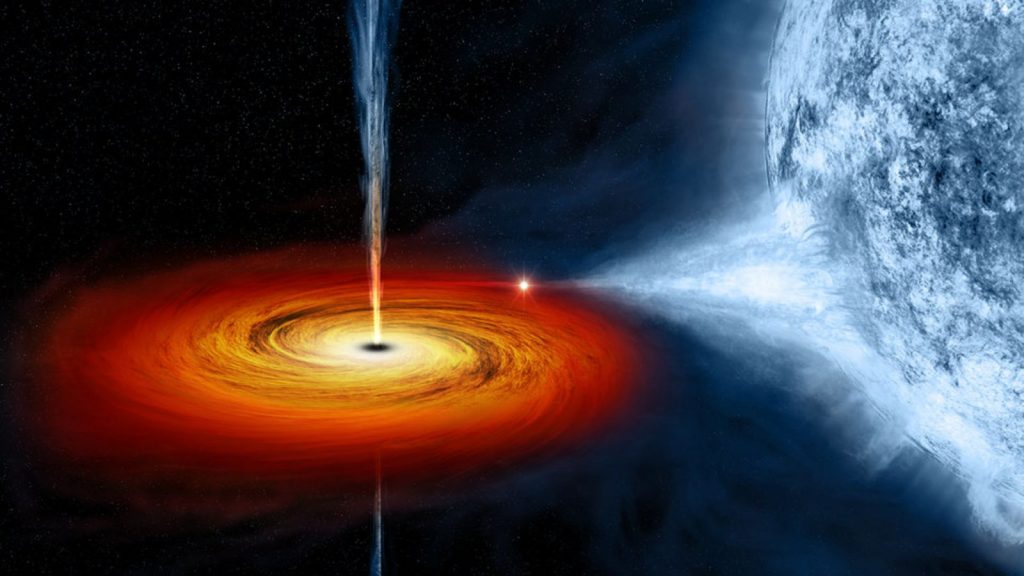 Microquasars are Galactic binary systems composed of a star and a compact object (a black hole or a neutron star) that eats up matter from its companion, usually via an accretion disk, giving rise to relativistic jets, i.e. beams of particles moving almost at the speed of light. These jets, which can be either intermittent or persistent structures depending on the specific state of the system, emanate from the vicinity of the compact object and can expand light years away from the binary system.

The word “microquasar” was used for the first time in 1992 to describe the Galactic binary system 1E1740.7–2942, characterized by radio-emitting double-sided jets [1]. The jets resembled the relativistic collimated outflows launched by quasars (active galaxies with supermassive black holes at the centre that devour its surrounding material), although, in the latter case, the powerful jets reach distances of up to millions of light years. Thus, we can say that microquasars, as their name suggests, are the little siblings of the quasars, sharing multiple similarities. One of the advantages of studying microquasars is that, given their smaller size, processes inside the system and jets happen on a shorter timescale, allowing scientists to analyze rapid variabilities in their emission.

Microquasars’ outflows are efficient sites of extreme particle acceleration and are responsible for transient and persistent non-thermal radiation, spanning from radio to gamma-ray energies. Nevertheless, the emission at GeV and TeV energies from microquasars has only been sporadically observed up to this point, making these systems a class of non-thermal emitters that is actually “elusive” in the gamma-ray energy range. With its improved sensitivity compared to the current gamma-ray instruments, CTA will be fundamental to the study of these systems and the physical processes inside the jets. In particular, two microquasars, SS 433 and Cygnus X-1, have been drawing attention over the past few years.

Prolonged observations of SS 433 with the High Altitude Water Cherenkov (HAWC) observatory were able to resolve two lobes at energies of ~20 TeV related the terminal parts of its jets, where the relativistic outflows interact with the surrounding environment [2]. According to the authors, to produce such a TeV signal, the system needs to accelerate particles up to PeV energies along the jets and, therefore, SS 433 might be a so-called Galactic PeVatron. Furthermore, a recent study with the Fermi-LAT has reported sub-TeV persistent emission from a site lying in the proximity of the eastern lobe [3]. Still some mysteries remain: What is the maximum energy to which the particles are accelerated in the jets? Does gamma-ray emission occur near or inside the binary system? What are the exact acceleration sites and mechanisms? CTA’s excellent angular resolution will play a key role in answering these questions.

In the Cygnus region, three microquasars have been observed above 50 MeV: Cygnus X-1, Cygnus X-3 and V404 Cygni (see e.g. [4,5]). The case of Cygnus X-1 is intriguing. At GeV energies, short-time transient emission [6] and persistent emission coming from the jets [7] have been detected, while at TeV energies, only a hint during a short hard X-ray flare has been reported by MAGIC [8]. Therefore, even though theoretically predicted, a clear TeV component has not yet been detected. According to recent simulations, the CTA-North array, located in La Palma (Spain), would detect a short transient event, similar to the hint reported by MAGIC, in just a few minutes, and would be able to characterize the TeV persistent emission from the jet with a set of prolonged observations (see Figure 1).