In September 2018, the Medium-Sized Telescope structure (MST-STR) and FlashCam teams started a joint test campaign in Berlin-Adlershof that resulted in the capture of the MST prototype’s first Cherenkov light. The integration of the camera with the telescope structure took place on 18 September. Thanks to advanced planning, the teams quickly completed the next steps of installing and testing the camera. Just 36 hours after the arrival of the camera from Heidelberg, it was ready for observation and data collection. 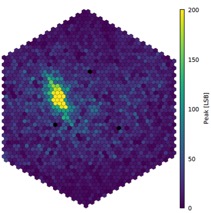 The next night, the MST directed its powerful eye towards the sky and successfully recorded its first Cherenkov light from air showers. The test campaign proceeded, verifying the interfaces and integration procedure of the telescope and camera, mirror alignment procedures, and the routine and remote operation of the telescope and camera. In addition, an unexpected visit of the massive storm Xavier to the region helped to confirm the telescope’s and camera’s durability in extreme environmental conditions.

“Everything performed as expected and the system integration went even smoother than anticipated, due to the very professional preparation of the technical teams from MST-STR and FlashCam – we couldn’t be happier,” said German Hermann (MPIK), project leader of FlashCam. “A big thank you to both the FlashCam and MST-STR teams for the very efficient cooperation,” added Markus Garczarczyk (DESY), project leader of MST-STR.

After six successful weeks, the camera was unmounted and returned to Heidelberg for further lab testing, while the MST structure will be operated and tested for another year in Berlin to verify its performance in preparation for the pre-production readiness review.

The MSTs are planned for both the northern and southern hemisphere arrays (25 in the south and 15 in the north) to cover the middle of CTA’s energy range (100 GeV to 10 TeV). An international collaboration of institutes and universities from Brazil (Universidade de Sao Paulo) and Germany (DESY, Humboldt University, University of Erlangen, University of Tübingen), are involved in designing and building the MST structure, and institutes from France (CEA Saclay), Italy (INAF) and Poland (Instytut Fizyki Jadrowej Polskiej Akademi Nauk) will provide the mirrors. The universities of Zurich, Erlangen, Tübingen and Innsbruck and the Max Planck Institute for Nuclear Physics in Heidelberg are executing the FlashCam project.

Learn more about the Medium-Sized Telescope.