In the Right Direction: The GCT Team Begins Observations in Paris 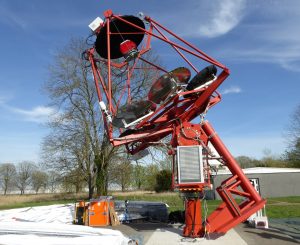 In November 2015, a CTA telescope prototype, the Gamma-ray Cherenkov Telescope (GCT), recorded CTA’s first ever Cherenkov light while undergoing testing at l’Observatoire de Paris in Meudon, France (read the press release). Since then, the telescope’s camera has been undergoing vigorous laboratory testing to prepare it for its installation on pre-production telescopes.

In March 2017, the camera was taken from its laboratory in Heidelberg, Germany, back to Meudon for a two-week commissioning campaign. A team of 12 worked around the clock to install the camera and run observing shifts with the goal to finalise the safety and operation procedure tests for the telescope and camera. This was the first time the camera would include a dedicated safety system and the first time the telescope would track cosmic sources. Although the Meudon site is appropriate for prototype work, Paris, aptly named the “City of Lights,” is not an ideal location to capture cosmic light from the night sky. However, as seen in the below video, the team was still able to capture thousands of images for analysis, including observations of blazars Mrk 421 and Mrk 501.

The GCT is proposed as one of CTA’s Small-Sized Telescopes (SSTs), covering the high end of the CTA energy range, between about 1 and 300 TeV (tera-electronvolts). To detect the short flashes of light produced by cosmic rays and gamma rays as they hit the earth’s atmosphere, the telescope’s camera must be about a million times faster than a digital camera. To do this, it uses high-speed digitisation and triggering technology capable of recording images at a rate of one billion frames per second and sensitive enough to resolve single photons.

The camera will now remain in Paris where observatory staff will conduct routine operations with the help of remote camera support to better understand the stability and reliability of the system.

Read more about the GCT.