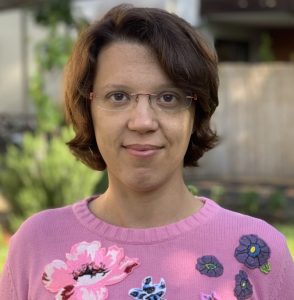 On 1 June 2019, Dr. Roberta Zanin joined the CTAO as the new CTA Project Scientist. She follows Prof. Jim Hinton, who, as CTA’s first Project Scientist, filled this position since 2012. It is because of his leadership that CTA has come so far in creating the requirements and systems definition of what CTA will look like. We are extremely grateful to him for all his important contributions to CTA in this role and look forward to him continuing as a key scientific advisor to the CTAO moving forward!

Roberta has devoted her entire scientific career to imaging Cherenkov astronomy during which she has taken part in all the three major currently-running instruments of this kind, as an active member of MAGIC and H.E.S.S. and as a visiting scientist at VERITAS. Cultivating her research interests between Padua, Barcelona, and, most recently, at MPIK in Heidelberg, she has built substantial experience in data analysis and interpretation, software development, operations and commissioning of the telescopes – all aspects in which she has been successfully involved, with increasing leadership responsibilities. A member of the CTA consortium since 2012, she has just completed her two-year term as a convener of the Galactic Science working group.

As a member of the CTAO in the construction and operations phases, the CTA Project Scientist has a key role in all science related aspects of CTA construction and operation. Roberta will work with the Project Manager and System Engineers, in tandem with In-Kind Contributors and the CTA Consortium, to ensure that the design, implementation and science verification of CTA achieves the science goals of the project. She also will be a member of the CTAO Change Control Board.