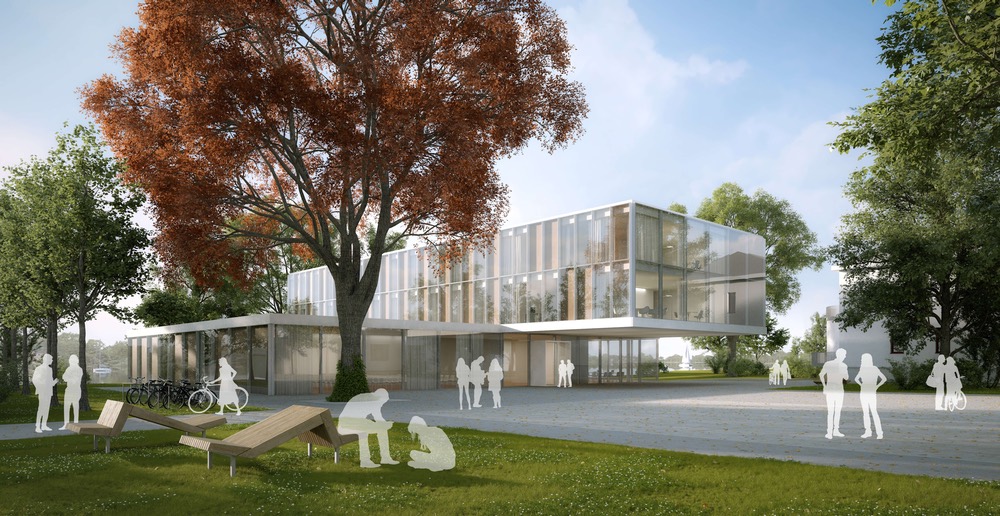 CTA’s Science Data Management Centre (SDMC), which will be in charge of science operations and make CTA’s science products available to the worldwide community, will be located in a new building complex on the Deutsches Elektronen-Synchrotron (DESY) campus in Zeuthen, just outside Berlin.

In preparation for the new personnel, planning is underway to outfit the DESY campus with a new SDMC building as part of a campus master plan, which includes a new canteen and education center.

A competition to design and construct a new building was initiated by DESY in 2018. The final decision on the winning design, with an award for the first, second and third winner, was announced on 11 March 2019. The first prize went to Heinle Wischer und Partner Freie Architekten GbR from Berlin, along with Ulrich Krüger Landschaftsarchitekten from Dresden.

“Planning a new building for the Science Data Management Centre, SDMC, and developing a masterplan for DESY’s research campus at Zeuthen is an exciting and complex challenge. That is why we decided, for the first time, to hold a competition to decide who should be awarded the contract,” explains Christian Harringa, Administrative Director of DESY and a member of the jury. The task was demanding: to design a high-quality new building within the context of planning a campus that would take into account the various different typologies of the existing interior and exterior spaces to form a prestigious whole.

“The offices of Heinle Wischer und Partner and Ulrich Krüger Landschaftsarchitekten presented outstanding and compelling plans,” Christian Stegmann was pleased to announce. He is in charge of DESY’s Zeuthen site as well as being the head of the Astroparticle Physics department.

Until the new building is constructed, CTAO personnel have taken up residence in an existing building on campus (the “Seevilla” at the South end of the campus) that has been recently renovated to host eight employees with room to grow. The temporary space now provides workspace for the Observation Execution System (OES) Coordinator and Science User Support System (SUSS) Coordinator and will eventually also be the home office of the SDMC coordinator.  The team at the SDMC will grow to support the construction of the CTA software products and to organize the required tasks in preparation for the science operations, including support for science planning, data processing and simulations and science user support.

Read more about the competition and award ceremony.