In the northern hemisphere…

The CTA northern hemisphere array site in La Palma has been full of activity recently as site infrastructure design studies commence and the Large-Sized Telescope (LST) prototype prepares for the next stage of assembly. Below, a draft schematic of the site layout for the four LSTs (plans for 15 Medium-Sized Telescopes not shown). Work on the site’s infrastructure, which is being coordinated by the CTA Project Office, is well underway. A Madrid-based company, Geo-Avance, has been contracted to conduct the topographical study of the site, which is estimated to begin in May. The study will report on the site’s characterization by taking detailed accounts of the contours of the rolling, rocky hills of the site and giving a bird’s-eye view with aerial photography. These details will be integral to design decisions for the placement of telescopes, roads and underground services (power and data). Preparations are underway for the geotechnical study, which is estimated to begin this summer. 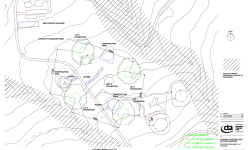 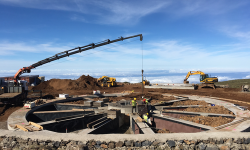 The LST prototype foundation (above, right) was completed in January 2017. The telescope and camera access tower foundations were constructed with 620 cubic metres of concrete or about 1,500 tonnes! This massive amount of concrete will help keep the telescope and its mirror (400 square metres) stable in event of very high winds.

The next step is to install the circular 23 m diameter rail used to spin the telescope, followed by the installation of the six-wheel undercarriage. The telescope structure is planned for installation between April and October. The camera access tower should be built in September and, in the final step, the camera is scheduled to be installed in November 2017.

In the southern hemisphere…

Signs of progress toward construction are beginning to pop up around CTA’s southern hemisphere site in Chile. Pictured below, shipping containers at Paranal are being refurbished to serve as the CTA site offices and meetings rooms, while piles of stones serve as makeshift markers for the future homes of CTA telescopes. 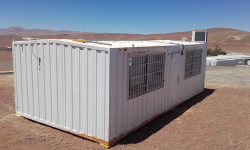 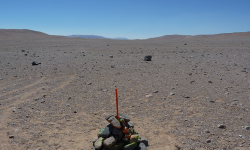 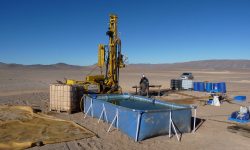 Like the northern array site, site infrastructure design studies are preparing the site for the final design of the facilities and services both above- and below-ground. The geotechnical study (above, right), which began in March and is estimated to be completed by the end of April, is being coordinated by the University of Warsaw and conducted by the Chile-based company Sondeal. The topographical study for site characterization will begin soon and be completed in May.

The detailed designs of the buildings and technical facilities are in the advanced development stages and are expected to undergo internal reviews before this summer.