Representatives of CTA Consortium institutes from France, Germany and Spain met in Saclay (France) in December 2016 to lay the foundations for an international sub-consortium that aims to deliver to CTAO one fully-equipped and functional Medium-Sized Telescope (MST) with a NectarCAM camera for the pre-production phase of CTA. The sub-consortium, named MSTN, proposes to install this telescope on CTA’s northern hemisphere site at Observatorio del Roque de los Muchachos in La Palma. 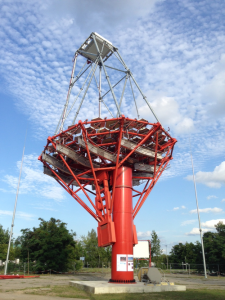 A total of 40 MSTs (25 in the southern hemisphere and 15 in the northern hemisphere) are planned to cover the central CTA energy range (100 GeV to 10 TeV). An MST prototype was deployed in Berlin in 2012 (pictured to the left) and has been undergoing performance testing, which will be used as input to the construction of the MSTN pre-production telescope. Similarly, elements of the NectarCAM are undergoing extensive tests in Saclay, and the results will be utilized building the pre-production camera.

The construction of the telescopes will be an international effort. The telescope structure will be provided jointly by Spain, Germany and Brazil, and the mirrors and the camera will come from France with possible contributions from Spain. Installation, commissioning and operation of the telescope in La Palma will be done within the framework of CTAO after a Pre-Production Readiness Review as an in-kind contribution to CTA. DESY, a German institute, will be responsible for the delivery of the telescope, with Stefan Schlenstedt (Germany) as the Principal Investigator and Jean-François Glicenstein (France) as the Co-Principal Investigator of the sub-consortium. The project will be overseen by a steering committee of funding agency representatives that is chaired by Carlos Delgado (Spain).

The formation of the MSTN sub-consortium (pictured above) is seen as a major milestone towards the construction of CTA. It is considered as a first step that will pave the way towards the building, installation and commissioning of more MSTs equipped with NectarCAM cameras during the production phase of CTA.

Learn more about the MST.