If you gaze up at a dark night sky, you can easily see the Milky Way, the barred-spiral galaxy hosting our solar system. If you are in the southern hemisphere, you can even spot one of our closest neighbor galaxies, the Large Magellanic Cloud (LMC). The LMC may be much smaller than the Milky Way, but it is the fourth largest galaxy in our Local Galaxy Group and full of a variety of interesting known and candidate sources of gamma-ray photons.

The LMC is one of the nearest star-forming galaxies and is very active, with five times the star formation rate density of the Milky Way. This activity is demonstrated by more than 60 supernova remnants, dozens to hundreds of H II regions (clouds of luminous interstellar gas), bubbles and shells observed at various wavelengths. Some of the most exceptional objects the LMC hosts include the star-forming region 30 Doradus, the star cluster RMC 136, the remnant of Supernova 1987A and the puzzling 30 Dor C super-bubble.

Supernova 1987A was first recorded in 1987 and is the closest supernova in recent times. Considering its distance, the almost face-on inclination and the typical angular resolution of CTA, the LMC is perhaps the only object that can provide us with a global and significantly resolved view of an external galaxy at gamma-ray energies. 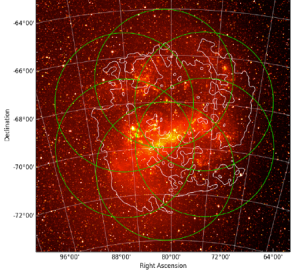 The image to the left shows a proposed survey scheme composed of six pointings evenly distributed around the LMC centre at a separation distance of 2 degrees (green circles, for a typical field-of-view radius of 3 degrees).

The current Fermi-LAT and H.E.S.S. instruments have revealed a small number of sources, some of uncertain nature. CTA will explore further and deeper, covering the entire LMC and permitting the probe of the population of VHE emitters in a galaxy and its connection to global galaxy properties. Below, a simulated comparison of CTA’s survey of the LMC with current optical and H.E.S.S. images.

Observations of this star-forming galaxy will address many CTA science objectives: population studies of supernova remnants and pulsar wind nebulae; transport of cosmic rays on large scales — from their release into the interstellar medium to their escape from the system; and the search for a signature of dark matter. To learn more about CTA’s LMC survey and other key targets, visit the Key Targets page or read our CTA Science Overview document (accessible in the Library when it is published in the coming weeks).