The Dark Side of the Matter

Originally published in the March 2020 issue of the CTA Newsletter. 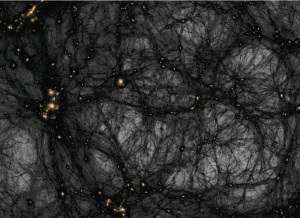 The existence of dark matter was first indicated in the 1930s when Swiss astrophysicist Fritz Zwicky found an anomaly as he was attempting to estimate the mass of large galaxy clusters using velocity measurements of individual galaxies within those clusters. He found the observed velocities were surprisingly high and postulated that the galaxies must be subject to a gravitational field much stronger than the one simply created by the mass of the observed systems and, thus, that the extra mass was the result of some form of unobserved “dark” type of matter. It took many scientists and 40 years to confirm these predictions, when American astrophysicist Vera Rubin provided robust observational evidences of the discrepancy between the predicted and observed rotational motion of stars in galaxies. Consequently, we now know that all galaxies sit at the centres of dark matter “halos,” characterized by a large central density but extending far beyond the visible galaxy’s size.

While this and many more recent observations tell us that dark matter exists, its nature remains one of the greatest mysteries in science.

While the Standard Model of particle physics can explain the known particles and forces in the Universe, it cannot explain the existence of the ever-mysterious dark matter. It turns out that none of the particles that make up the Standard Model can completely satisfy the properties of dark matter as is required by cosmological observations. This gap implies that the Standard Model is incomplete and that the solution to the dark matter puzzle may be the link to other unsolved problems in particle physics, so its study could result in a significant breakthrough in our fundamental understanding of nature.

Long-standing candidates for dark matter particles are the so-called Weakly Interacting Massive Particles or WIMPs. WIMPs appeared as a perfect dark matter candidate: theoretical particles with a mass of 100 -1000 times the mass of a proton (100 GeV – 1 TeV, approximately), which would naturally be produced with the right abundance in the early Universe. WIMPs, however, are far from being the only candidate. The wide range of proposed candidates spans about 40 orders of magnitude in mass: from extremely light but theoretically well-motivated particles like “axions“ over the much heavier “WIMPZillas” to macroscopic objects such as primordial black holes.

Gravity led to the discovery of dark matter’s existence, and it is still the only force known by which dark matter particles interact. However, if the dark matter particle is to complete the Standard Model of fundamental particles, the hope is that it will also be able to interact with other known particles, which could provide another opportunity for detection.

Over the past few decades, the scientific community joined forces and devised a clear three-pronged strategy to (initially) search for WIMPs: via their production in particle collisions (like in the Large Hadron Collider in Geneva), via their scattering with Standard Model particles in dedicated detectors (called “direct detection” experiments) and through astrophysical observations. The main idea of the latter is that, in regions of the Universe where the dark matter density is high, dark matter particles could self-annihilate or decay, producing Standard Model particles that would reach us in the form of cosmic rays, as well as gamma rays.

Thus, there is no doubt that CTA will act as a powerful dark matter discovery instrument: CTA will detect very high-energy gamma rays, a promising means to search for dark matter as gamma rays travel in straight lines (as opposed to charged cosmic rays) and are easier to capture than neutrinos. In particular, CTA will use its unprecedented sensitivity and energy resolution to capture gamma rays exactly over the energy range that corresponds to the heavier end of the WIMP masses.

A variety of experiments over the past few decades have explored and excluded a significant fraction of the lighter WIMP candidates. However, while current instruments are not sensitive enough to detect some of the best-motivated WIMP models, their signals may be lurking exactly in CTA’s optimal energy range. In particular, in an upcoming CTA Consortium publication, CTA scientists demonstrate that the data from the planned survey of the Galactic Centre, where the density of dark matter is expected to be the highest, together with modern analysis techniques, will enable CTA to explore the “Holy Grail” region of the WIMP scenario in detail for the first time in an unrivaled way (see Figure 1).

Figure 1: Main frame: Artist’s view of the CTA-South array with the view of the Milky Way plane and the Galactic center. Overlaid in violet is a prediction, from computer simulations, for how the dark matter gamma-ray signal might look. Inset: The plot showing the dark matter interaction cross section (y-axis) vs the dark matter particle mass (x-axis). The blue horizontal line marks the region where the WIMP dark matter signal is expected to be. While light WIMPs (left part of the x-axis) are already excluded, the heavier WIMPs will be probed by CTA (CTA sensitivity shown with black lines). Credit: C. Eckner; Rendering: Gabriel Pérez Díaz (IAC), Marc-André Besel  (CTAO); Simulations and inset: CTA Consortium.

Beyond WIMPs, another pending publication will look at the major role CTA will also play in exploring currently inaccessible aspects of axion-like particle dark matter models. Moreover, unlike current ground-based gamma-ray instruments, CTA will use three different types of telescopes (the Large-, Medium- and Small-Sized Telescopes) that will expand the energy range from 20 GeV up to 300 TeV. This, along with its better 10 percent energy resolution, will maximize CTA’s opportunities to detect spectral features associated with the interaction of dark matter particles of unexpected sources.

The potential CTA brings to the hunt for dark matter is clear: it will exponentially increase our chances of solving the mystery behind dark matter in the next decade, and it could very well hold the key to unveiling completely unimagined discoveries in the field of fundamental physics.

More about how CTA will study dark matter.

Sally Ride: The Sky is No Longer the Limit