In honour of the International Day of Women and Girls in Science, which aims to raise awareness about the work and achievements of women in STEM and to promote equal opportunities in the field, the CTA Observatory (CTAO) will hold its third edition of “Women of CTA.” For the first time, the event will be carried out virtually through the CTA YouTube and Facebook channels at 18:30 on Thursday, 11 February.

“Women of CTA” will feature three female astrophysicists – Elina Lindfors (University of Turku), Mireia Nievas (Instituto de Astrofísica de Canarias) and Leslie Paige Taylor (University of Wisconsin-Madison) – who will share their work developing the physics, software and hardware for gamma-ray astronomy, as well as their professional and personal experiences in the field. The event, moderated by Alba Fernández-Barral (CTA Observatory), will include a “Question & Answer” session with the viewers. 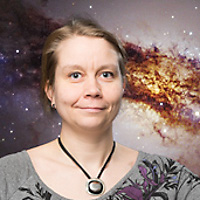 Elina has been studying the extragalactic very high-energy gamma-ray sky since 2002. She obtained her PhD from the University of Turku (Finland), where she is currently working as senior researcher. She specializes in emission models for blazars. These are distant galaxies that host supermassive black holes from whose vicinity jets pointing close to our line of sight are launched. They are among the most efficient particle accelerators of the Universe. Elina served as coordinator of the Extragalactic Working Group in the MAGIC Collaboration and the CTA Consortium, and she is currently the Science Coordinator of the latter. Her astronomical interests cover also other regimes – Elina has great interest in multi-wavelength and multi-messenger studies that can help unveil the Cosmos even further. 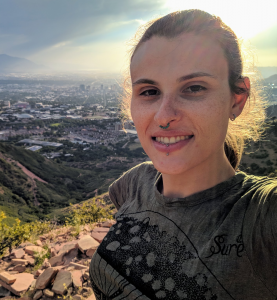 Mireia has been working in the very high-energy gamma-ray astronomy field since 2013. She finished her PhD in Astrophysics at Universidad Complutense de Madrid (Spain) in 2018, working for the MAGIC Collaboration in both software development (such as the on-site analysis that takes place during observations) and in science as it relates to a type of bright and violently variable blazar. Afterwards, she moved to work as a postdoctoral researcher for DESY (Zeuthen, Germany) for the VERITAS Collaboration, focusing on calibration methods for Cherenkov telescopes, software for early detection of flaring Active Galactic Nuclei (AGNs) and the study of extreme extragalactic sources. Since summer 2020, she has been working as a postdoc for the Instituto de Astrofísica de Canarias (IAC, Spain) in the commissioning of the prototype of CTA’s Large-Sized Telescope, the LST-1, installed in La Palma, and she is starting to work in the AGN Science Group of the CTA Consortium and MAGIC.

Leslie graduated in Physics at the University of California (Berkeley). She started as a graduate student at the University of Wisconsin-Madison five years ago, where she soon joined the CTA group and began developing her PhD thesis. Her work focused on hardware, developing the camera of the prototype Schwarzschild-Couder Telescope (pSCT), a proposed design for CTA’s Medium-Sized Telescope. She worked on the installation of the camera at the Fred Lawrence Whipple Observatory (FLWO), where she travels frequently to perform the commissioning of the system. The pSCT was inaugurated in January 2019, and over that year she established the observing procedure for the telescope. She completed the observations that resulted in the first light of the pSCT, as well as led the initial observations of the Crab Nebula that resulted in the telescope’s detection of this standard candle in gamma-ray astronomy.

“Women of CTA” is an annual event carried out under the Astrodiversity program, which gathers all those activities and initiatives organized or supported by CTAO within the inclusion and diversity framework. Find more information regarding Astrodiversity and, particularly, about the worldwide situation of women and girls in science on the Astrodiversity page of our website.