Breaking down the barriers to science

CTA would not be possible without the 1,500+ members from 31 countries that work together to implement what will be the world’s largest and most sensitive gamma-ray detector. We are proud of our diversity and aim to be a reference for inclusion and respect in science, as well as to work internationally to achieve equity in our field. Diversity in scientific groups is not only morally fair, but also beneficial for the working environment, increasing creativity and providing different points of view that help to approach and solve problems diversely. Based on this idea, the CTA Observatory (CTAO) has created the Astrodiversity program – an initiative to develop and implement activities organized under the diversity and inclusion framework.

Since its launch in 2019, several Astrodiversity activities have already been organized or are being prepared. Two events are currently active: 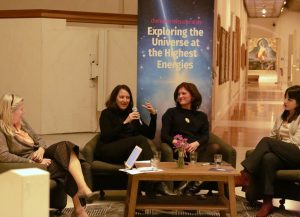 The pioneering event for this annual initiative honouring the International Day of Women and Girls in Science was initiated in Bologna on 11 February 2019. “Women of CTA” gathers three experts from the astrophysics and engineering fields to share their academic, professional and personal experience in science and contributions to CTA.  The event was created as part of the global effort to raise awareness and find solutions to gender inequality and the overall under-representation of women in science. Despite international efforts to move equality forward, which is fundamental to developing a healthy and productive environment to achieve social and scientific goals, women still represent less than 30% of the total researchers worldwide [1]. Moreover, according to a United Nations study in 14 countries around the world, the probability of female students graduating with a Bachelor’s degree, Master’s degree or Doctorate degree in science are 18%, 8% or 2%, respectively, against the 37%, 18% or 6% for male students [2]. The disparity is also visible through the so-called “Leaky Pipeline:”  a metaphor used to illustrate how women enter the field at a higher percentage but drop off as they move to the higher stages of their career. And at an even more fundamental level, girls run into gender stereotypes before starting undergraduate degrees, deterring them from pursuing scientific/technological careers compared to degrees in humanities. As one of the important factors that gives rise to these disparities is the reduced visibility of female leaders and their achievements in STEM (science, technology, engineering and mathematics) careers, we hope that highlighting women who are leading and contributing to CTA will create a spark for girls and women interested in or already pursuing a STEM career.

AMANAR: Under the same sky

“AMANAR: Under the same sky” is an initiative to promote and support the scientific education and the development of scientific skills of children living in the Saharawi refugee camps in Tindouf (Algeria) through the observation and understanding of the Universe, as well as to encourage peace, common understanding and a sense of world citizenship under the same sky. Conceived by the international organization GalileoMobile and the Asociación Canaria de Amistad con el Pueblo Saharaui (ACAPS), the project combines outreach activities and visits to the Canary observatories with the children in July and August as part of  their summer in the Canary Islands with the “Holidays in Peace” program, as well as visits to the refugee camps by a group of scientists and experts. The CTAO is an active partner in this project, supporting the organization of activities in the Canary Islands and the provision of educational material for the camp visits. The program initiated in 2019 and is expected to last three years.

Future activities will target other under-represented communities, including the hearing and visually impaired. For more information on the specific activities and editions already carried out, see the list below.

Another important aspect of the program is building a global network of astronomy outreach professionals and enthusiasts interested in sharing ideas and collaborating on these important efforts. To this end, we have created a mailing list to connect and inform those interested about Astrodiversity and inclusion-related international activities (including those organized by CTA member institutes and external collaborators). All are welcome to join the mailing list. If you would like to be included or receive more information, send an email to CTAO Outreach and Education Coordinator, Alba Fernández-Barral.

On 11 February 2020, in recognition of the International Day of Women and Girls in Science, CTAO hosted the second edition of the annual “Women of CTA” event at the Scuderia – Future Food Living Lab, in Bologna (Italy). This edition gathered three astrophysicists working in different subject areas and at different stages of their careers, with the goal of sharing their work and experience in science and CTA, as well as providing a complete view of the academic career’s evolution: Carla Aramo (Researcher and CTA group leader at INFN-Naples), Ambra Di Piano (Master student at INAF-Bologna) and Roberta Zanin (CTAO Project Scientist). Read more on our website.

In July 2019, the project “AMANAR: Under the Same Sky” (selected as a “Special Project” within the IAU’s 100th Anniversary activities), conceived by GalileoMobile and the Asocicación Canaria de Amistad con el Pueblo Saharaui (ACAPS) and co-funded by the Instituto de Astrofísica de Canarias (IAC) and the IAU’s Office of Astronomy for Development, kickstarted in Tenerife, La Palma and Gran Canaria. As one of the participating partners, the CTAO supported the organization of activities for children that came to the Canary Islands (Spain) within the “Holidays in Peace” program and provided educational material for the visit to the refugee camps that took place in October (check full list of all partners here). Read more in our Newsletter or read press release on our website.

On 11 February 2019, on the United Nations’ International Day of Women and Girls in Science, CTAO hosted the first edition of its “Women of CTA” meeting at the Pinacoteca Nazionale di Bologna (Italy). The annual event, is part of a worldwide effort to empower women in STEM, to recognize their achievements and to raise awareness of gender inequality in science, especially in leadership roles. On this occasion, three experienced experts in astrophysics and engineering, who contribute to CTA, joined the panel: Patrizia Caraveo (INAF representative in the CTA Consortium Board and CTAO Council), Emma de Oña Wilhelmi (CTA Science Coordinator) and Chiara Montanari (CTAO Interface Manager). Read more in our Newsletter or on our website.